Apparently all my finger crossing worked, because when I got up Sunday morning and checked the rainout line, Indian Camp Creek was open! We made plans over waffles for breakfast, and then those plans were slightly delayed because DH decided (despite being told it could wait) that he wanted to install my trailer camera RIGHT THEN. So we ended up getting a later start than I wanted, but it worked out fine :) DH decided to join us, since the weather was unseasonably lovely again. Also I think it makes him twitch when I take the truck and trailer out alone because he has an overactive imagination and always thinks something bad will happen to me if he's not there, haha. Probably not helped in this instance by him being concerned about T riding Cinna and she devilishly messing with him when we got back Saturday -- he asked how things went and she deadpanned and told him she only fell off 5 times. HIS FACE oh my god, lol. 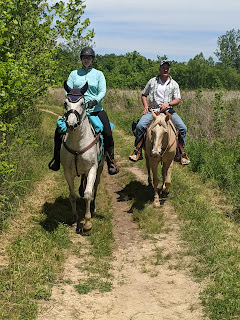 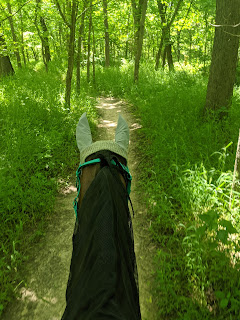 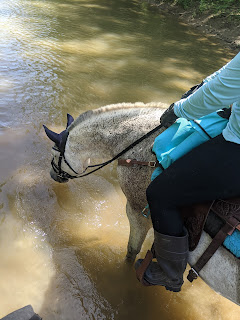 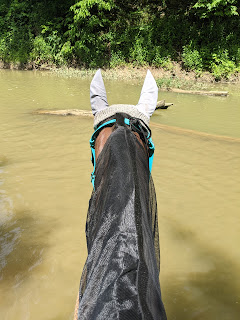 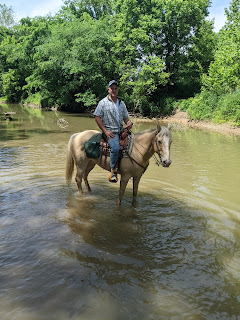 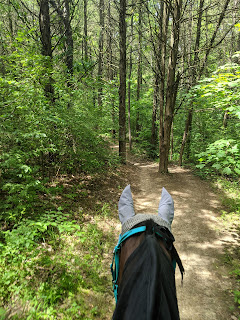 If you follow me on social media, you probably already saw this episode, but this was definitely the most excitement we've ever had out trail riding. Crossing the road into a section where the trail ran through a big open field, a bicyclist stopped us to tell us there was a rider down and hurt on the trail in front of us, and that he was waiting to flag the ambulance down to send them up to get him, because the rider couldn't walk. About that time we could hear sirens, and we decided the best thing to do would probably be get PAST the riders and further onto the trail so we weren't in anyone's way -- trained medical professionals were almost there, so we figured nobody needed us..... right? Except then my husband, ever the hero, decided we should stop and offer to hold the horses for the wife while they loaded the husband up in the ambulance, so T dismounted and held Trigger and Cinna at a safe distance, while I stayed on Ruby (I wasn't sure I could get back on from the ground with her height/the Spanish saddle!). On the plus side.... the horses got quite the free desensitization session. Although apparently EMS also sent a helicopter, because they weren't sure the ambulance could reach the rider -- thankfully it could and they called off the chopper. I can only imagine what my horses would have thought of a helicopter landing in front of them! 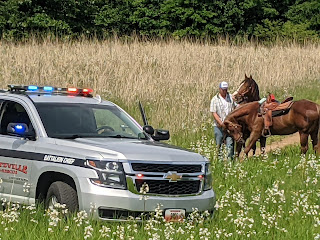 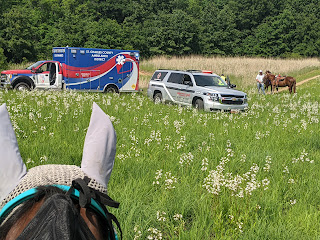 Eventually they got the guy loaded up and on his way. Luckily his daughter and granddaughter were hiking nearby, so the wife called them to come take the horses back to the parking lot so she could go directly to the hospital. The daughter and granddaughter had a little bit of horse experience, but the horse that tossed the guy was a bit of a handful, so we offered to give them a lead back to the trailhead. It went okay for a while, but then we crossed the road and they decided that would be a more direct route to the trailhead -- which was fine, except I wasn't going to ride my horses along that road because I know how people drive in the park. So we wished them good luck and kept following the trail (side note, even with stopping to play in the creek for a while, we still arrived back at the trail head only a few minutes after they did, so I'm not sure it was much faster to take the road, but whatever, not my circus not my monkeys). We were prepared to offer to help them load, but they managed, and got back on the road. I hope everything turned out okay, but in all the commotion I didn't think to try to get contact info to follow up (also I guess it wasn't really any of our business but I am curious!). 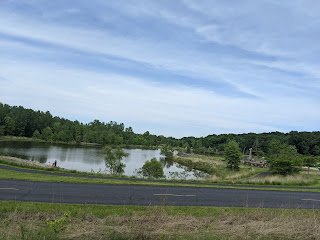 We got back a little later than I planned since we spent quite a while waiting for the ambulance, but luckily it was a long weekend so we didn't have to worry about getting up early Monday :) we invited my mom over and had a nice little Memorial Day BBQ that evening. T had to leave early the next morning to drive home, but hopefully now that she lives in reasonable driving distance we can do this more often! And hopefully maybe I can haul Ruby up to see her and Karma and take them out on adventures up where she lives! :)