It's been an exciting couple of days for the feral cats around the barn! Aside from our (fixed, vaccinated, and friendly) barn cats Tom and Lady, we also support some feral cats.

Annie was born shortly before I attended Rolex in 2017, to a friendly tabby who showed up one day missing a tail that we started calling Bob. Annie had a cute little black tuxedo brother we called Elvis (both names in homage to my aunt who passed away the day before I left for Rolex). Unfortunately, feral cat life is dangerous, and both Bob and Elvis disappeared. I'm sure I have photos of them, but the amount of effort required to go through three years of cell phone images looking for cat pictures is beyond me on a Friday, sorry, lol.

Annie hung around though, even occasionally letting me pet her (mostly while I was filling her food dish lol). Unfortunately, being a female cat, Annie started having kittens. I caught her first litter last year around the time we started construction, and since I was so busy, my mom took them in for some socialization before we rehomed them, and ended up falling in love and keeping one. Unfortunately when I caught them, one escaped, which is how we ended up with Puff (when he was young he was so white he looked like a little cotton puff).

We started making efforts to catch Annie after the first litter, to try and get her spayed, but unfortunately she was far too wily for the live trap. So she continued to have kittens. She had 11 this year alone -- a litter of 5 this spring (4 of which I caught, socialized, and rehomed) and then 6 more shortly after (all of which I caught, socialized, and 4 have been rehomed so far). We redoubled our efforts to try to catch her. I set the livetrap every day for a week and managed to catch Puff twice, a raccoon, and a possum... Sigh.

Wednesday night we were sitting in the hot tub and I looked over to see a completely new and strange cat nosing at the empty food dish. Five minutes later, we heard the unmistakable clang of the livetrap closing. 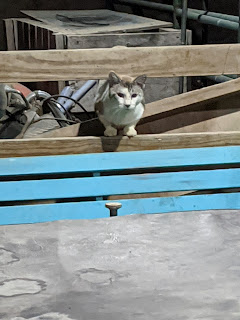 There is a place about 40 minutes from us that will do low cost spay/neuter, and also takes feral cats (a lot of vets won't mess with them). They have a $25 special for ferals that includes a rabies vaccine and ear tipping. Since it's a pretty good drive, we decided to try to nab somebody else to take along with new kitty (since we have so many that need it, ughhhhh). By this point, Puff had wised up that the humans were trying to catch him and he wanted no part of that. I needed to start working, so I went back inside and left DH outside armed with a fishing net, some wet food, cages, and a lot of Acme-cartoon-level ideas about how to try to catch the cats haha. Amazingly enough, he did manage to catch Annie finally -- a can of wet food inside a wire crate, fishing line tied to the door, and he hid in the tack room and pulled the door shut once she ventured in.
We called up to make sure they had time to add two ferals to their surgery day -- it's one of those things where it's hard to schedule appointments for this because there's no guarantee you can catch them on any specific day, haha. But then we got thrown another curveball -- they will only take ferals if they're in a live trap. We only have one live trap, and New Kitty was occupying it. So DH called around and managed to locate one at the neighbors, and he ran it over (and also helped DH transfer Annie from the wire crate into the livetrap -- glad I didn't have to help with that, lol). We squeaked them in under the 10 am surgery deadline, and now we are looking at a kitten-less future!

Hopefully someone in the not-too-distant future I'll be able to catch Puff and Gray Kitty (who also hangs around the barn, but I don't have any good recent photos of) and run them up to have their balls chopped -- then I should be completely free of cat reproductive organs on the farm ;)
If you're feeling charitable, the organization has a donate button on their website: https://www.spayneuterprojectmo.org/. When I paid for these two, I went ahead and made an additional donation, and will do the same next time I take ferals up there. There is a huge need for their services and every dollar helps to break the cycle of overpopulation, particularly with feral cats. I got to experience firsthand exactly how many kittens an unaltered female can produce and it was only luck I was able to catch and place the kittens into good homes. I can't imagine how many more I would have been stuck with if we hadn't managed to finally catch her!
Posted by ConfessionsofaDressageBarbie at 6:00 AM