Last week I really made an effort to get back into a regular routine with the horses (why is this always the story of my life?). I'm still trying to figure out my timing with the WFH thing... like I may broach working later hours so I can return to riding in the morning, like my summer hours from a few years ago -- except with no commute... WINNING! Wednesday I rode Ruby, and shared the photos last Thursday -- I didn't write about the ride, but it was pretty damn great! Thursday night the farrier was scheduled to come out, so I didn't ride.
Friday I was really stoked to ride Cinna, and she was pretty chill when I caught her and brought her out... and then things devolved quickly from there. Jack and Cinna got even more herdbound as a result of me basically letting the horses be feral for a year while we finished the house. So now when I take her out of the pasture, despite the fact that he can still SEE HER, and the other horses, he runs himself into a tizzy. That's how he ended up with the only colic episode I've ever had to deal with in my 14+ years of multi-horse ownership (knock on wood), so to keep the peace, normally I just toss him out with Trigger and Ruby so there's less screaming and idiotic behavior. This time, I made the tactical mistake of pulling her out and cross-tying her first, and then trying to move him. She was unhappy about that, busted the cross ties, and ran around like a lunatic. I sighed, caught her, fixed the cross ties, and started over. The minute she seemed to be calming down, I turned my back to grab her a cookie so we could move on... annnnnnnd she busted them AGAIN and took off.
Sooooo. Instead of riding, we had an hour of remedial cross tie/groundwork training and reminders that we, in fact, know how to behave like a grown, civilized horse. Which mostly consisted of me sitting on the tack shed steps replying to emails while she stood there and stomped her feet. That ate up most of my riding time (plus my mind was not in a great headspace to climb on at that point lol) so I decided to work on scrubbing some of the leftover winter grime off her instead. Despite lamenting my lack of a dedicated wash stall (it's on the list!), Cinna was actually pretty cooperative for ground-tying-ish for me to scrub her tail, and I KNOW she enjoyed me scrubbing the dirt and dead skin out of her roached mane (she is the itchiest horse I have ever met lol). It was still a little muddy so I took her out front to graze while she dried, because I'll be damned if I was going to turn her out wet and immediately watch her undo all my work!
Despite some wild and wacky weather, I did squeeze in some horse time over the long weekend! Saturday I was hoping we might be able to go out and do something fun, alas, it was not to be. DH wanted to take the boat out, but the necessary parts didn't come in on time. I wanted to haul out and ride, but the nest full of baby Robins was still on my trailer, and there was nowhere to move them too. Sad day. So we did some work out at my mom's place, and Sunday was our designated house cleaning/errand running day (and the weather was intermittently sketchy both of those days), but Monday dawned bright and beautiful (albeit hot and humid) and I was ready to ride! The horses were both on board with this plan, and I had everyone worked, hosed, and back in front of their fans before noon! We switched back to night turnout over the weekend, because it got STUPID hot, and I forgot how much I love it and how much easier it makes my life! 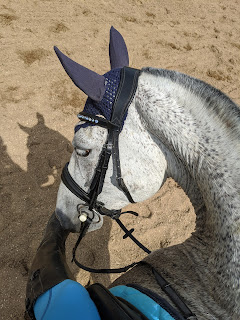 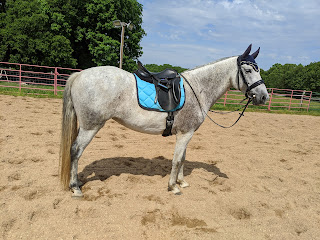 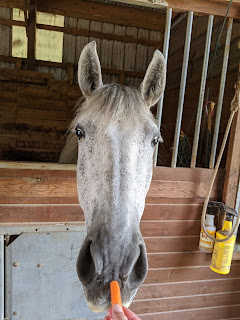 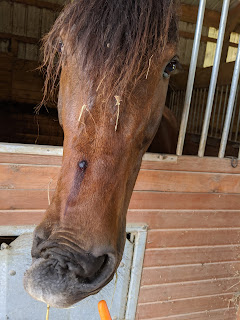 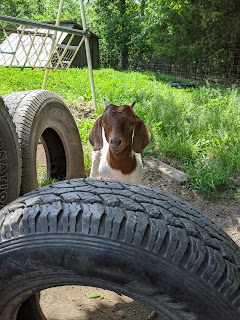 It was a really busy weekend but I ended it feeling great. We got a lot done around the farm, the horses got worked, and I felt refreshed and ready to head back to work. I hope you got to enjoy plenty of horse time too!
Posted by ConfessionsofaDressageBarbie at 5:00 AM 10 comments:

I sat here for a while and thought about writing a real post, but the words just aren't there. Thanks writer's block. It's been a minute. Instead just enjoy some snapshots from the last 24 hours. It was a busy Wednesday! 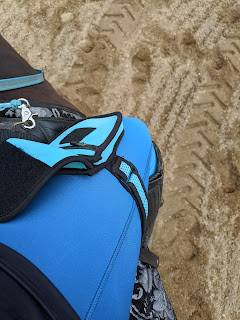 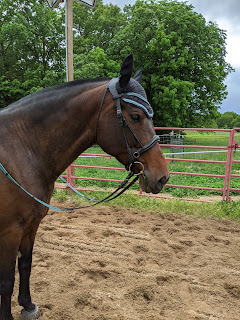 Anyway... just trying to make it through the week so I can relax and enjoy a 3-day weekend! How about you?
Posted by ConfessionsofaDressageBarbie at 5:30 AM 10 comments:

I'm not actually sure how long it will take me to get all of the organizational things sorted out, but we got started on those last weekend as well!
I dithered incessantly over the bridle hooks -- my last set that DH made were too close together and it was always annoying trying to get bridles down and put them back. Of course, I gave them away before I thought to measure the distance between them as a "what not to do". I tried some creative googling for standard distances, but didn't find much. Naturally I also polled my friends, and got a variety of responses ;) best case scenario sounded like 11 inches between hooks, but if I did that, I could literally devote an entire wall to bridles and still maybe not have them all hung.
I had some scrap lumber so I tried setting it up, and I finally decided on a distance (8 inches center screw to center screw), bit the bullet, and hung most of the racks on my two boards. Those were boards we still had from the house project, which is why they're mismatched lengths, but it actually worked out fine because it gave me a chance to stagger my bridles. The long one went up top for the bridles that don't get much use (show halters, Spanish bridles, etc.), and the lower one is for daily use stuff to be in easy reach. There was a little space on each right side -- not enough for another hook, but an awkward opening. They were perfect for the weird little wrought iron horse head triple hooks I bought! So that's where lunging equipment hangs. 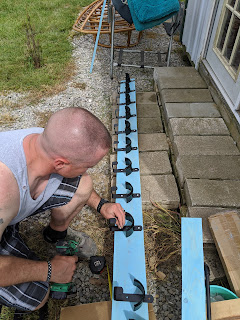 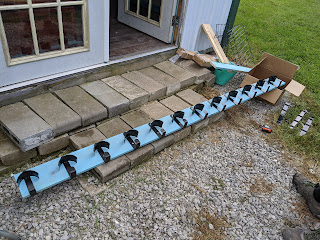 So while it's still FAR from done, it at least looks and mostly functions like a tack room again!

Posted by ConfessionsofaDressageBarbie at 5:00 AM 8 comments: