I’m sure this quick recap will be missing lots of nuance and details, since now it’s been almost a week since the ride, but ya know, life happens. So Saturday afternoon, after the vacuum introduction and spending a crap ton of time doing work around the farm, I finally had some free time to ride. DH was off doing stuff for the first half of the ride, but he did wander over and catch the tail end and snap some photos. This actually worked out well, because the first half of the ride was legit a shitshow.
To explain why it was a shitshow, you need to know that between Saturday’s ride and the previous time I worked Cinna, DH had put up a new tarp shed against the goat fence, and the tractor is living there for the moment while he works on the 4-wheeler in the lean-to. Why does that matter? Because in Cinna’s world, anything new or different or changed in some incremental way is TERRIFYING and OBVIOUSLY THE END OF THE WORLD. Never mind the fact that she watched him put up the shed and can see from literally every corner of her turnout, and it had been up for a week at this point. Clearly, once we entered the arena to work, it was a HORSE-EATING MONSTER that could not be trusted. In all honesty I had completely forgotten about the shed until the ride came to a screeching halt less than 5 minutes after I got on.
We made it approximately 2/3 of the way around the arena before she zeroed in on it and kind of lost her shit. First, we lost forward. Then we lost the ability to keep our front feet on the ground. Finally, she started backing and attempting to spin and swinging her neck around. 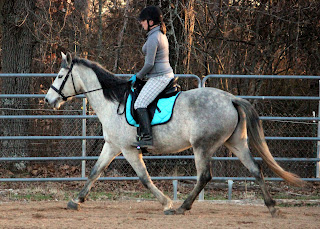 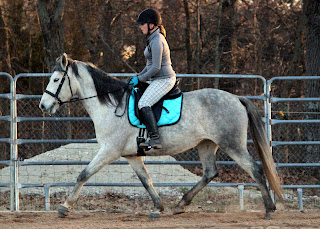 About the time her ears almost made contact with my nose, I began to wonder if this might not have been a day where starting the ride off with a lunge would have been smarter. But I persevered – if she wanted to fixate on the shed and point her body at it, then by god we’d do lateral work down the rail and she could keep an eye on it while her feet did what I told her. It was scarier tracking right (for whatever reason), so we did serpentines and diagonals and changes of direction until she started to focus a little more on me and a little less on the shed. 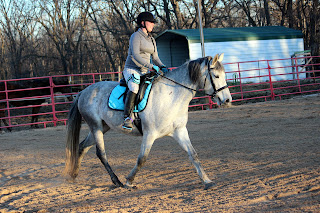 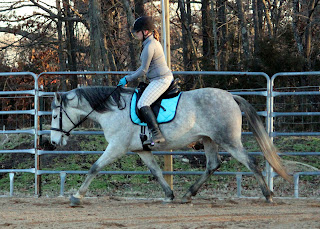 Eventually she settled in and started to really go to work, and I was glad that I chose to work through the initial tension. And bonus, DH even got some halfway decent pics! The other noteworthy event in the ride was a very sassy right lead canter transition where she positively leap-bucked into it – of course, even though DH was taking photos by then, he missed that particular shot. I just laughed at her and made her do it again, sans theatrics. She’s always going to be a horse to keep my on my toes, but by golly when she’s good, she’s very very good.
At the end of the ride, I rode her through some semblance of the Intro A & B tests – I haven’t actually ridden them in a show in about a year, so I was rusty, but I rode the general test pieces. She’s definitely capable of doing them, and doing them well, I just think the constant pitfall is going to be her tension in new places or her tendency to have tantrums about things she deems “scary”. I’d love to get her out and about more to get more practice working through it, but if the rest of the year goes anything like the way it’s started, there isn’t going to be any discretionary funds for horse shows. But hopefully I can connect with some local farms about hauling in to ride to at least expose her to new venues, and continue to get her out for the occasional trail ride.

After the ride, I hand walked her out to the shed for some desensitization -- with the proper application of a few candy canes, she was soon touching the shed with her nose and standing still while I ducked inside and rattled the walls. So hopefully it will be less problematic next ride :) at least, until DH moves it to a new location and we start the game all over again!
Posted by ConfessionsofaDressageBarbie at 7:08 AM