Hopefully ya’ll got a good laugh out of our flail photos yesterday! :) Going for honesty here, and to be honest, not all the parts of our rides are pretty! But lucky for me, most of it was decent, so here, enjoy more photos, haha. 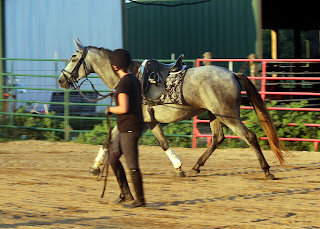 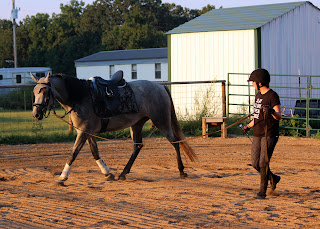 Cinna tacked up like a champ, and didn’t bat an eyelash when DH drove the tractor by (he’d been dragging the arena) -- very proud of how far she’s come about “spooky” things. Six months ago, a running tractor within 10 feet of her would have sent her into the stratosphere. After we tacked up, I lunged her for a minute -- it was very humid and she’s not in shape, so I only spent a few minutes each way so I didn’t completely tire her out. She was a little dancy at the mounting block again, so I just waited her out and kept walking her back to it, and eventually she stood long enough for me to get one. She immediately wanted to back up, so I made her stop and hang out for a second. I feel like we need a lot of work at just standing still -- both in hand (as evidenced by the horse show) and under saddle. She needs to learn that sometimes, doing nothing is okay. 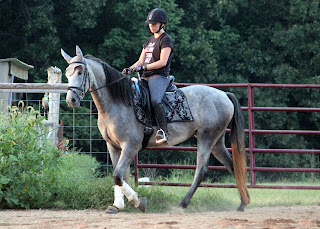 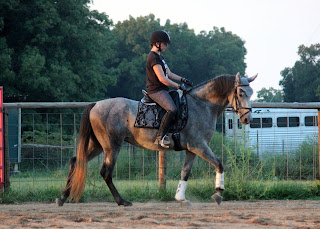 She’s getting mostly okay with DH sitting in the corner in his scary plastic chair of death (hardy har har), but Monday night my mom was over there, as well as her mini Aussie Tyrion. Cinna doesn’t mind dogs if they are sitting still (although she did go after poor Tyrion on the lunge line when he made the mistake of crossing her circle), but she did not want anything to do with the corner when mom and Tyrion were over there, so we worked down there at the walk until she was able to relax and ignore them. 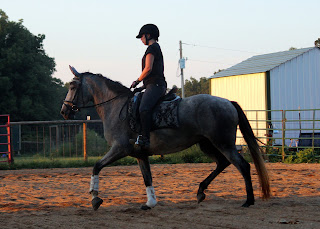 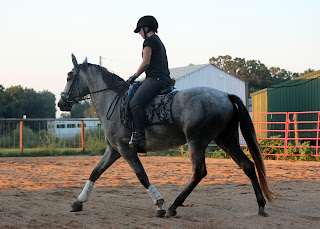 Something I was working on without necessarily being conscious of doing it, was just sitting quietly and letting her figure things out (this is probably a recurring theme in my rides with her, but sorry ya’ll, you can hear it again). One of the posts I read yesterday from A Enter Spooking was talking about a clinic she audited and one of her takeaways was that you have to be able to ride neutrally before you can make positive changes to the horse. I’m going to go ahead and assume that the rider she was watching at the clinic was probably 213420984x more talented than me (as is the author of that particular blog) but I feel like that concept really captures what I’m trying to do with Cinna right now -- it remains to be seen if I can make positive changes to her in the future, but here’s hoping kids!
Monday I focused on keeping myself neutral, hands low, seat quiet, legs lightly on but not nagging, etc. I feel like this came in handy during our big “launch”, and even though she was able to unseat me a little, I was balanced enough to not eat sand (don’t ask me how, I really thought I was coming off), and then immediately pick back up where we had been before the explosion.
While obviously there were plenty of baby shenanigans, there were also quite a few moments where I thought “wow, she feels great!” Very soft, with me, listening, even moments of slight lateral work back to the rail when she’d come off. Right now she’s very much in love with the rail, because it makes her feel secure -- I did attempt a few centerlines (mostly to convince myself it would be a bad idea to enter the dressage show in 3 weeks -- *hint* I was correct) and those were fairly disastrous... Like turning her entire head and neck in while her body continue to travel along the rail disastrous, so clearly we have things to start focusing on! 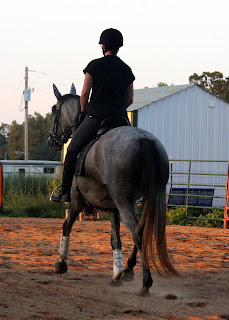 Now that I’m a little less worried about the “she’s gonna spook and I’m gonna die” aspect, I feel like we can start on some actual work. For those wondering what precipitated those really fun flail photos from yesterday? I asked her for the right lead canter, and she completely ignored my aids. I asked a little “louder”, and she just kept toodling along at the trot. I flicked my whip into my boot (always my first go to) and she woke up a little, but still content to just trot along. So I lightly tapped her with the whip -- that did the trick! Of course after the explosion was over, I asked again for the canter and she was great. She wasn’t scared of the whip, just expressing her royal highnesses displeasure at actually being, you know, tapped with it. Baby horses can be so dramatic... haha.
I commented earlier this week on a goal post that I’m never motivated enough to write out goals, so I’m going to try it. Goals for Cinna for September (since the weather should start cooling down) 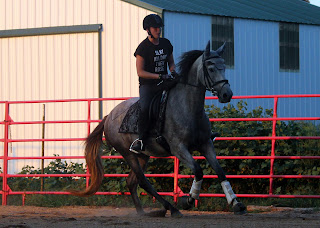 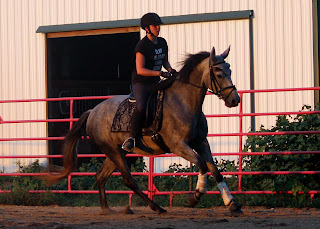 That’s probably way too many goals, but I’m a “go big or go home” kind of person, haha. If I manage 50% of those, I’ll be thrilled! 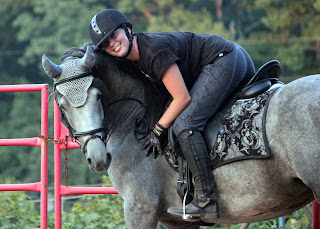