For whatever reason, Blogger inserted all these photos backwards.... but ya know what? Don't care. 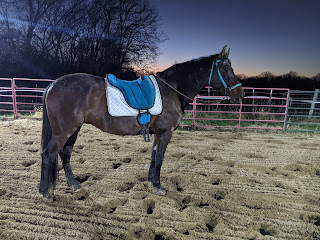 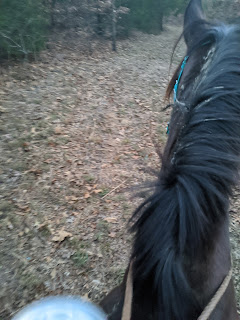 I'm just sad I couldn't get video of her spooking the neighbor's sheep. They kept running in and out of the barn (or rather, BOUNCING in and out of the barn) and Ruby couldn't stop dragon snorting at them. I almost fell off I was laughing so hard.
Posted by ConfessionsofaDressageBarbie at 6:30 AM 4 comments: 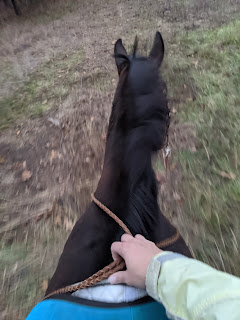 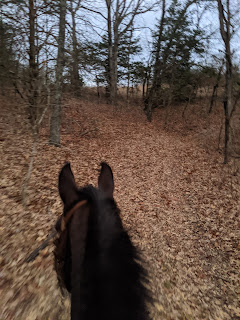 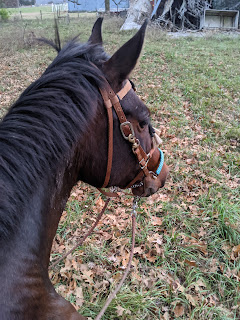 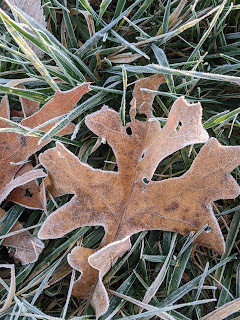 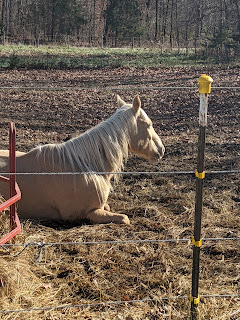 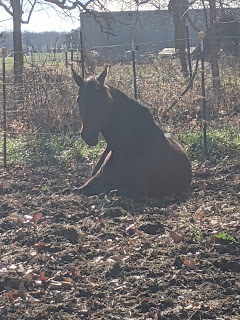 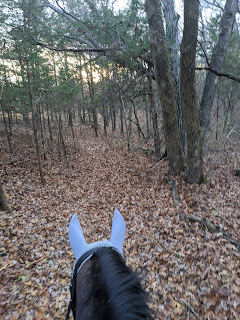 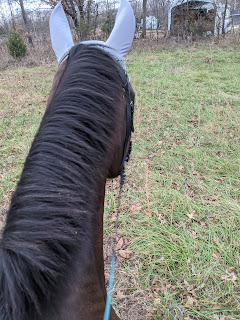 Anyway. That's what's new in my world. I hope if you've had a string of nice weather days like here, that you're getting in lots of riding -- or whatever makes your heart happy!

Posted by ConfessionsofaDressageBarbie at 7:30 AM 4 comments:

Last Sunday was another beautiful, sunny, 70+ degree day, so DH and I had previously agreed it would be perfect to haul out and ride! Saturday at the tack sale, I ran into my dressage instructor (side note: its been an embarrassingly long time since I've had her out for a lesson, can I keep calling her my instructor? I need to schedule a lesson lol) and she wanted to pick my brain about local trails. She was planning to haul out with one of her clients, so we discussed the pros and cons of various trails within easy hauling distance. I told her we were hauling out to Indian Camp Creek, which is hands down one of my favorite trails, and that we were amenable to planning our timeline around theirs if they wanted to explore the park for the first time with someone more familiar with it :) also since Trigger and Ruby are relatively chill trail horses, they can be a good influence if you're taking out a horse less comfortable on the trails -- which is something I've definitely taken advantage of when getting Cinna some trail miles! 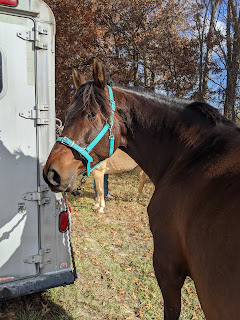 We tentatively planned to meet up around 10:30, which turned into closer to 11:30 due to a variety of factors: we pulled out of the driveway and realized we desperately needed fuel, and the closest gas station (aside from the one down the road that's closed on Sunday, bah) was in the opposite direction we needed to head, then there was a slowdown on the highway, then the GPS was being squirrely, etc.... but it worked out just fine, as the parking lot was PACKED when we got there, and the delay meant we let most of the big groups go out in front of us. Our riding buddies for the day were on a cute gaited horse (Rocky Mountain I think), and an OTTB that Ruby and I boarded with a few years back. 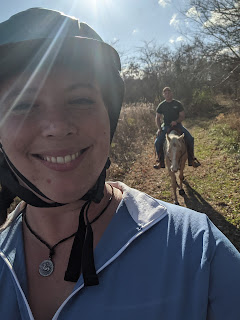 DH and I had a really good time, so hopefully our trail buddies did too! I really, really love this trail, so it makes me happy to be able to share it with other people. Although it was a little frustrating to post a few photos to social media about what a fun day it was only to have someone come on and post a vaguely pity party-esque comment about wishing they had friends to ride with. It was so weird, because it's not like this was some sort of grand conspiracy or some sort of exclusive trail riding clique, we just happened to run into each other at the tack sale and discuss meeting up. And then the person who made the comment (who was someone I would have previously called a friend), made another backhanded comment about how I was just an acquaintance and they would never expect me to invite them out riding. It just left a bad taste in my mouth. I've met up with a variety of different people to go out trail riding over the last few years, I feel like I'm pretty flexible and chill about it, whenever people comment on my posts about it I always tell them I'd be happy to go with them to whatever park it is and show them around. Sometimes I do think about it far enough in advance to post where we're going and when in case anyone wants to meet up, which I guess I didn't do this time... but still... IDK. It just kind of annoyed me a little, but I guess in the end whatever comments people makes on my happy, positive post really says more about them and their frame of mind than it does about me, and ultimately that's not my responsibility. So. If you're local, and you want to go trail riding, it never hurts to reach out :) if it's going to be a reasonably nice day and I have no plans, I am ALWAYS up for trail riding!
Posted by ConfessionsofaDressageBarbie at 5:00 AM 10 comments:

Whew, it's been a minute! We've been enjoying what I've been referring to as "second autumn" for the last week or so, including a ton of days in the mid-70s last week. I didn't get as much riding done as I would have liked early on, because I was feeling a lot of stress over the election... and if there is one thing having dramatic Spanish mares has taught me, it's that on days when my emotions are out of control, it's best not to swing into the saddle. Ruby will tolerate it a little bit, but Cinna just feeds off me and then we end up in an ugly downward spiral. But let's play catch up in photos, since that's what I'm best at!

Last Saturday a local barn held a big tack sale. I had been planning to go to poke around (not that I needed anything) and hang out with friends, but then someone posted an ISO in the event looking for a 17.5" W dressage saddle.... I had been idly kicking around the idea of selling my Schleese, since I bought it for Topaz (and then sold her like 9 months later). I held onto it hoping Cinna would grow into it, but the last few times I've tried to ride her in it, she made it VERY CLEAR she doesn't care for it... the idea of listing it online and dealing with people/shipping seemed awful, but a local sale wouldn't involve most of that. So I traded a few messages with the person posting the ISO, and while it ended up not working out for them, another lady was interested in it. So I tossed it and a bag full of other junk I keep meaning to sell in my truck, and had a really nice Saturday at the sale. My saddle sold in about 20 minutes to the person who had been wanting to try it (although I told her I won't cash her check until she has a chance to ride in a few times/have her fitter give it a look over, and if it doesn't work out we'll just swap the check and the saddle back), I sold some old riding tights and bought some fun new stuff, swapped a saddle pad for some breeches, but most of all got to have lots of (masked, outdoor, distanced) conversations with local horse people... I hadn't realized quite how much I missed all those interactions I normally get photographing shows or attending GMO meetings until that day. It was really, really great.

Once things started slowing down at the tack sale, I packed up the handful of my things that didn't sell (leaving a good chunk of stuff for the local pony club because I didn't feel like taking things home lol) and headed back to fit in a little riding before we lost the light -- couldn't waste another beautiful 75-degree day! While I was gone, DH had been working with the neighbors to clear more/connect the existing trail systems. 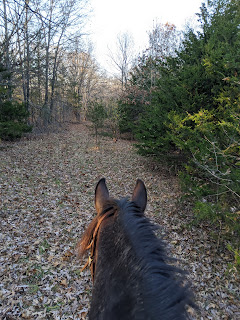 And since this entry is getting a little long.... some foreshadowing for tomorrow? :) 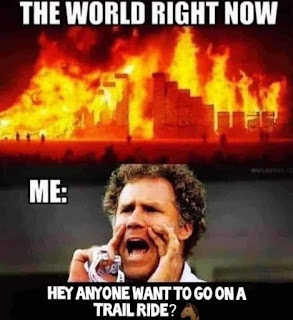 Posted by ConfessionsofaDressageBarbie at 7:30 AM 8 comments: